The main purpose of testing is to deliver a high-quality product to the customer. To ensure the product is a quality product, testers carry over various types of testing. In this article, we are going to discuss a new type of testing called “Adhoc Testing”.

The main purpose of testing is to deliver a high-quality product to the customer. To ensure the product is a quality product, testers carry over various types of testing. In this article, we are going to discuss a new type of testing called “Adhoc Testing”.

Testing an application randomly by using logical or illogical scenarios and check whether the application has any bugs or not is called the Adhoc testing. It is a free form of testing.

The word “Adhoc” means something which is not in an order or not organized. Similarly, the Adhoc testing is also not structured and performed in an informal way.

Adhoc testing is mainly for negative testing and this testing procedure doesn’t have any formal documentation. Tester should test the developed application the way he or she wants, but the intend should always be finding the bugs to provide a bug free application.

Why does a Tester perform Adhoc Testing?

1.Requirement for Facebook login: If the user enters correct username and password details, the user needs to be redirected to their respective home page.

Adhoc Scenario for the above requirement:

Adhoc Scenario for the above requirement:

Create a fake account in face book and send friend request to more people. Friend request gets rejected by many people. The face book server identifies the user as spam user. Now, try to send the friend request. Face book server throws the message as “You can’t send friend request for the next 180 days” in Pop-up window. Click on “Ok”. Then try to send the same friend request again. The server will show the message again. Click on “Ok” again. Repeat the process of sending the request multiple times. At certain point, request is sent to the user successfully. By doing continuously and clicking ok for many times, in Continuous 180th click, request is sent successfully. There is no need to find these types of bugs, but such issues can be discovered during the Adhoc testing.

Adhoc Scenarios for the above requirement:

Scenario 2: Create a word document for testing purpose. Rename the word document by adding “.jpg” at last in the file name. Try to upload that word file in the form. Validate what happens?

When does a tester need to execute Adhoc Testing?

When does the tester not to execute Adhoc Testing? 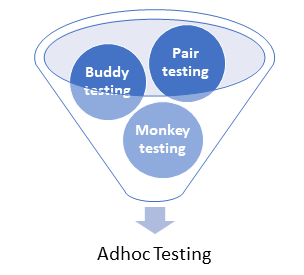 In this type of testing, one tester and one developer work together on the same module once the developer completes the unit testing on the module. This kind of testing enables the feature to be viewed in a broader scope for both tester and developer. The developer will gain a perspective of all different tests the tester runs, and the tester will gain a perspective of how the inherent design is made– which will help him/her avoid designing invalid test scenarios, thereby preventing invalid defects.

In this type of testing, the testers randomly test the product or application without test cases with a goal to break the system. This testing helps us to discover some new bugs which might not have been caught earlier.

Skills required to do Adhoc testing:

How does Adhoc testing differ from Exploratory Testing?

Both Adhoc and Exploratory testing are informal type of testing, but we have some differences between them.

Adhoc testing helps the tester deliver a high-quality product to the end-user. While doing this testing, testers behave like an end user and test the application. Adhoc testing will be effective only if the tester is knowledgeable about the system under test.