API – Application Programming Interface which enables communication and data exchange between two different software; the process of Testing this data exchange communication in the form of request and response by using a tool is called as API Testing.

In order to test an API, we need a tool. There are many tools available in the market and among them the most commonly used tool is SOAP UI tool. Before moving into testing API service, we must make sure that the Environment is set up properly and the corresponding Database and server connections are configured correctly.

There might occur in a situation where the Web Service is not in our control or the service is not available. So, we use an approach of virtualization for testing purpose—this is known as mocking

Example: what and when to go for Mock Service

Let us consider there is a complex environment that consists of three modules named as ‘A’, ‘B’, and ‘C’. Now A’s response is used as an input for B and B’s response is used as an input for C. Only A and C modules are ready for testing but due to the interdependencies of the modules testing cannot be done. To overcome this, we use mocking a process in which a virtual WSDL file is used to test at the early stage and later when the Module B is ready, then the End to End testing can be performed

The Mocking can be done in two ways; one is using the WSDL file which is not hosted or just mock the request

There are two types of mocking responses:

How to Mock a Service in SOAP UI Tool:

It is used mainly to test the positive scenario. It is the process in which only one default value should be returned as output in the response type; whatever request is sent; it will return only the default value.

Below is an example for configuring the Static Mock Service 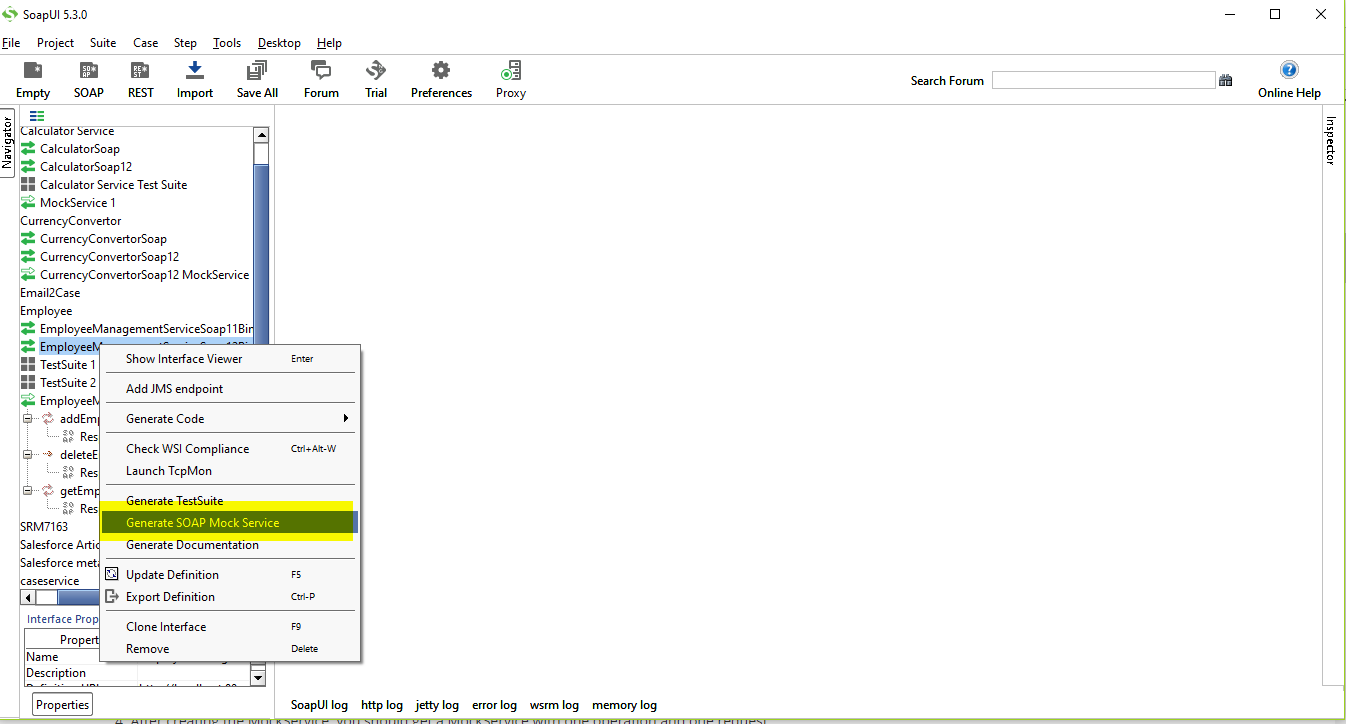 Let us now try the Mock Service for the getEmployeeDetails

Double click the getEmployeeDetails operation in the created Mock project 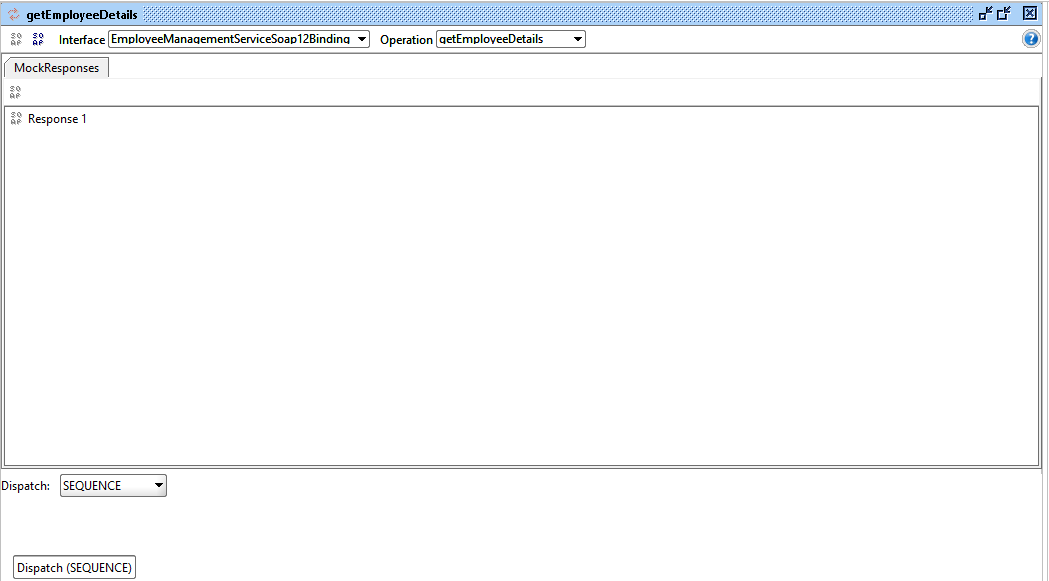 List of data that are available in the Database

Note: we can also hardcode the value by using a variable ${Variable Name} that is declared in the script

It is running on port 8088; so, let’s Run the Request to test the created Mock Service

Running the Request to get the details of Employee -Keerthana 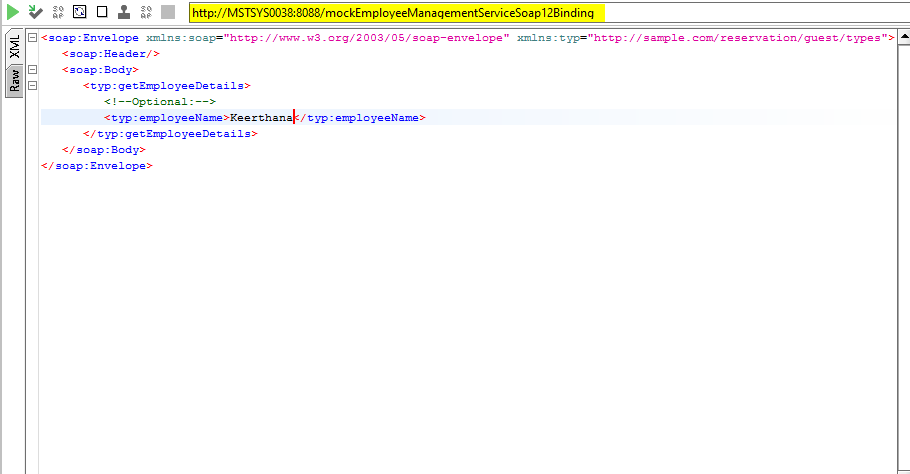 As we have created a Mock Service with a constant value to be returned. The output of the Request returns the response value that is set while creating the Mock 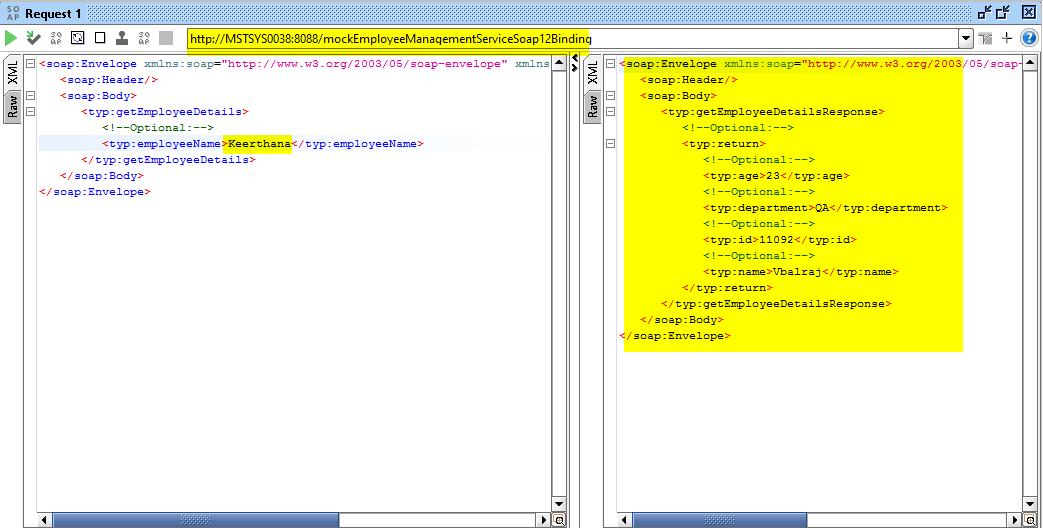 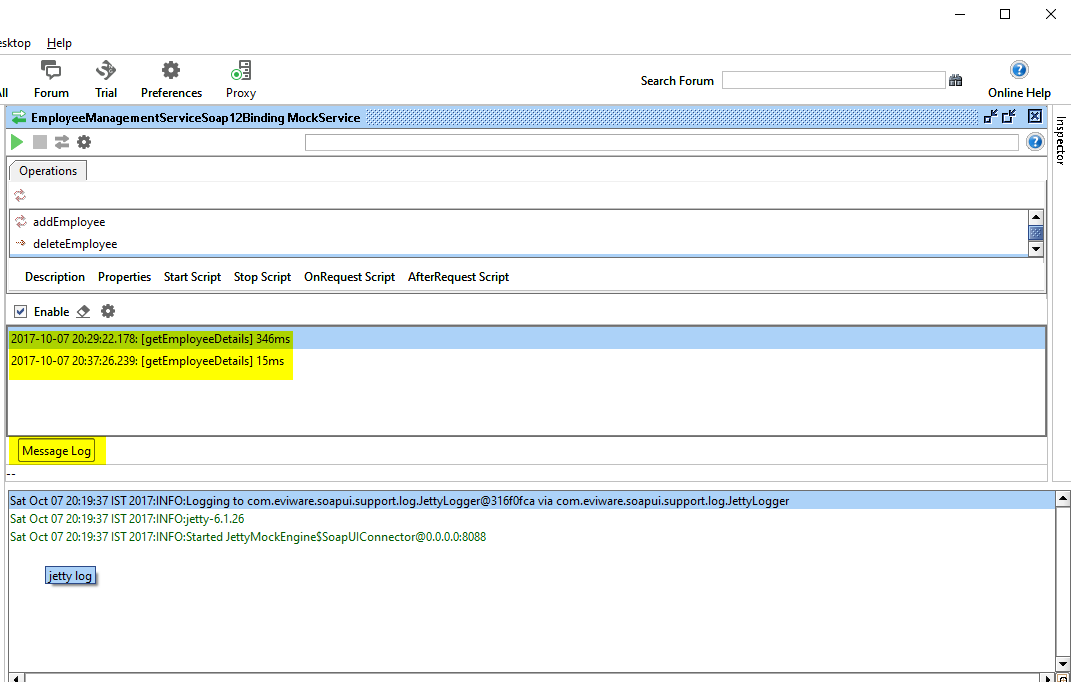 By double clicking the log lines, we can see the details of the message

As soon as the Mock Service is started, immediately inside soap UI we can see those in the Jetty log at the bottom of the SOAP UI window 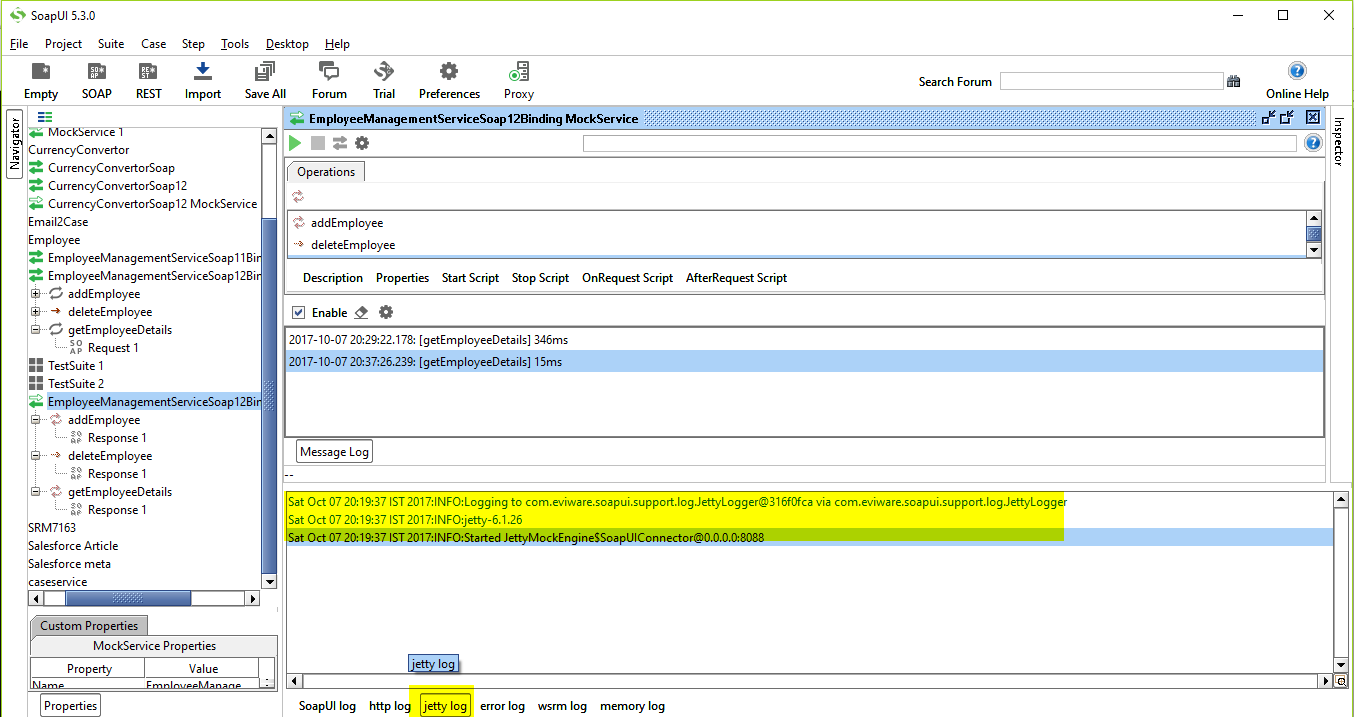 Based upon the request value, the response will be triggered from the set of responses that are framed. 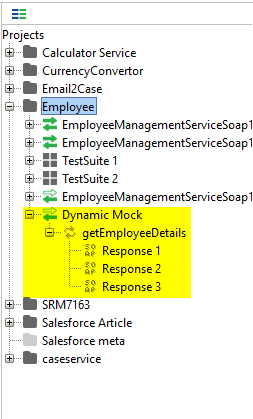 Based on the value specified in the Dispatch field, the operation is done 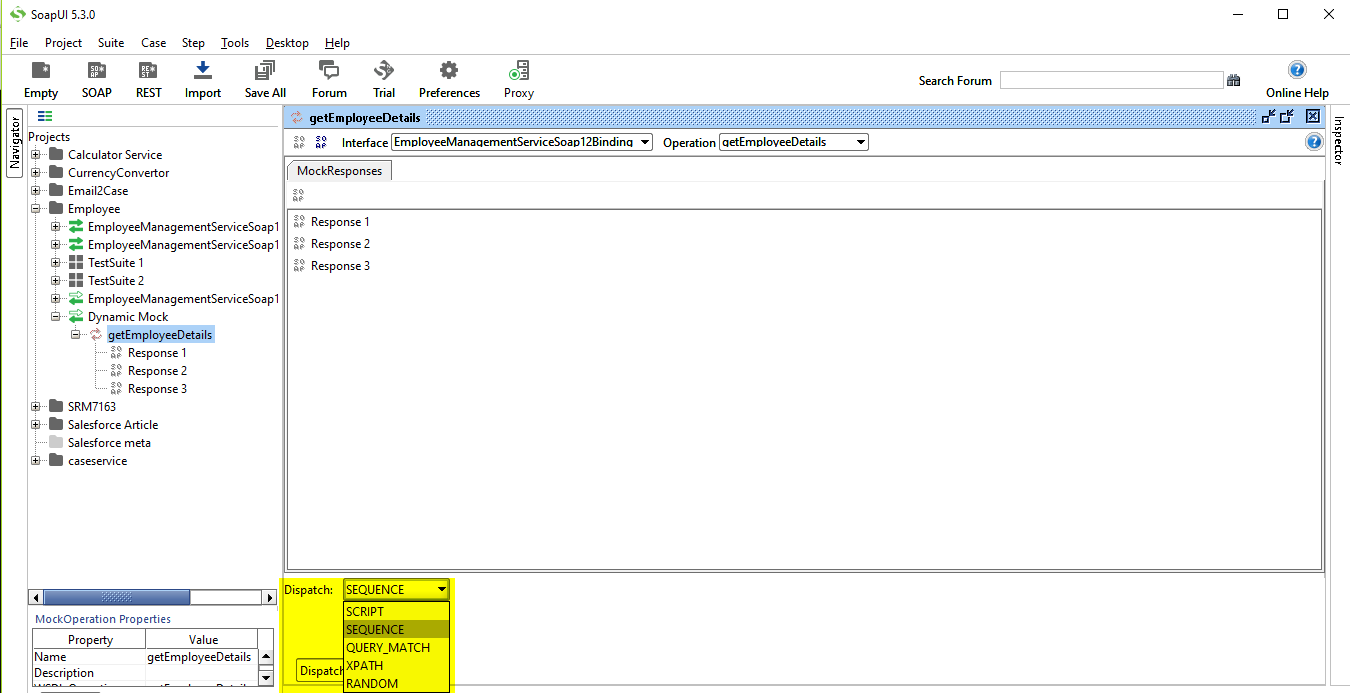 Irrespective of the data sent in the request, the responses are received in a sequence as how it is defined in the mock response 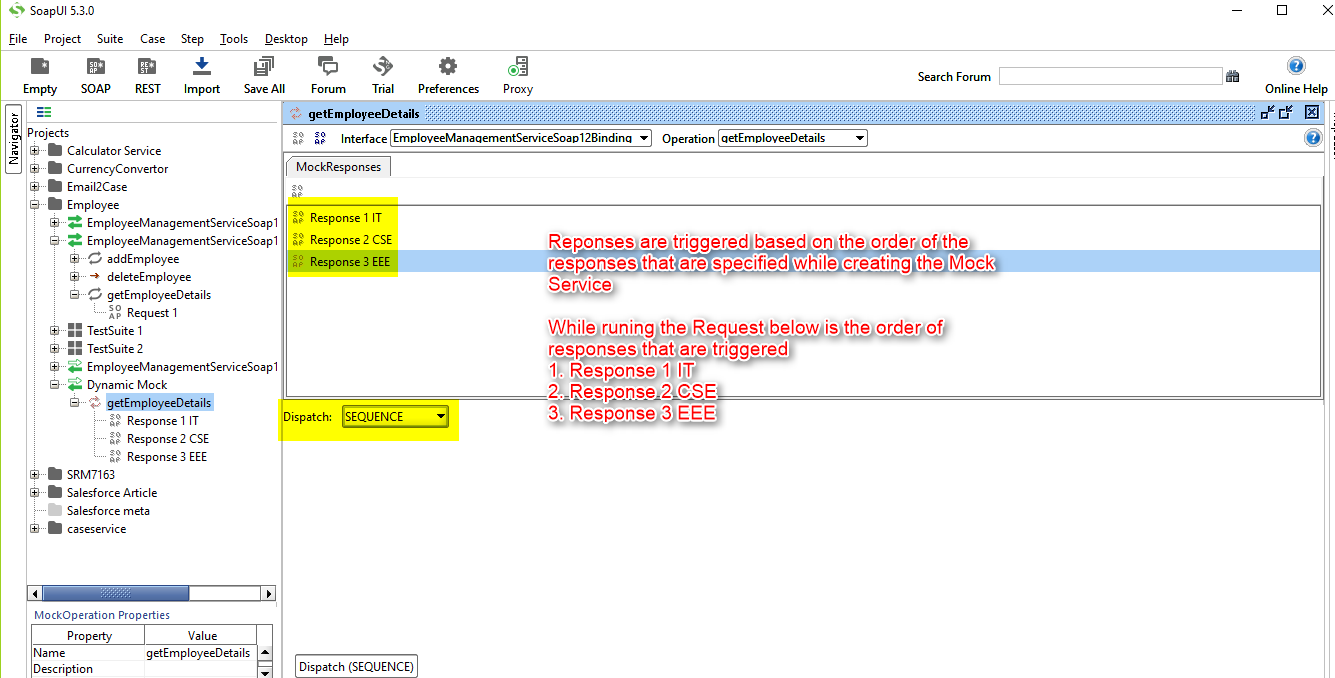 Based on the query that is configured, the response is triggered for the request that is sent 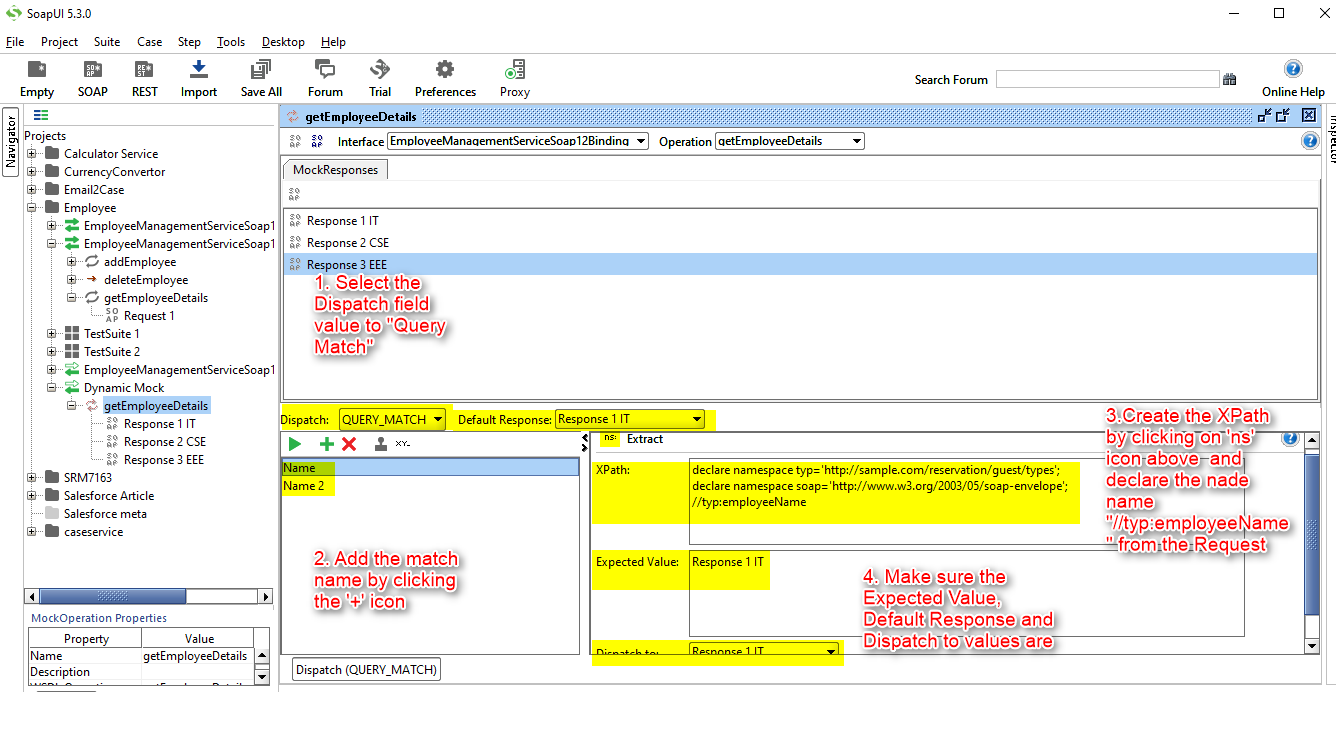 Randomly triggers its own Responses when the Request is sent 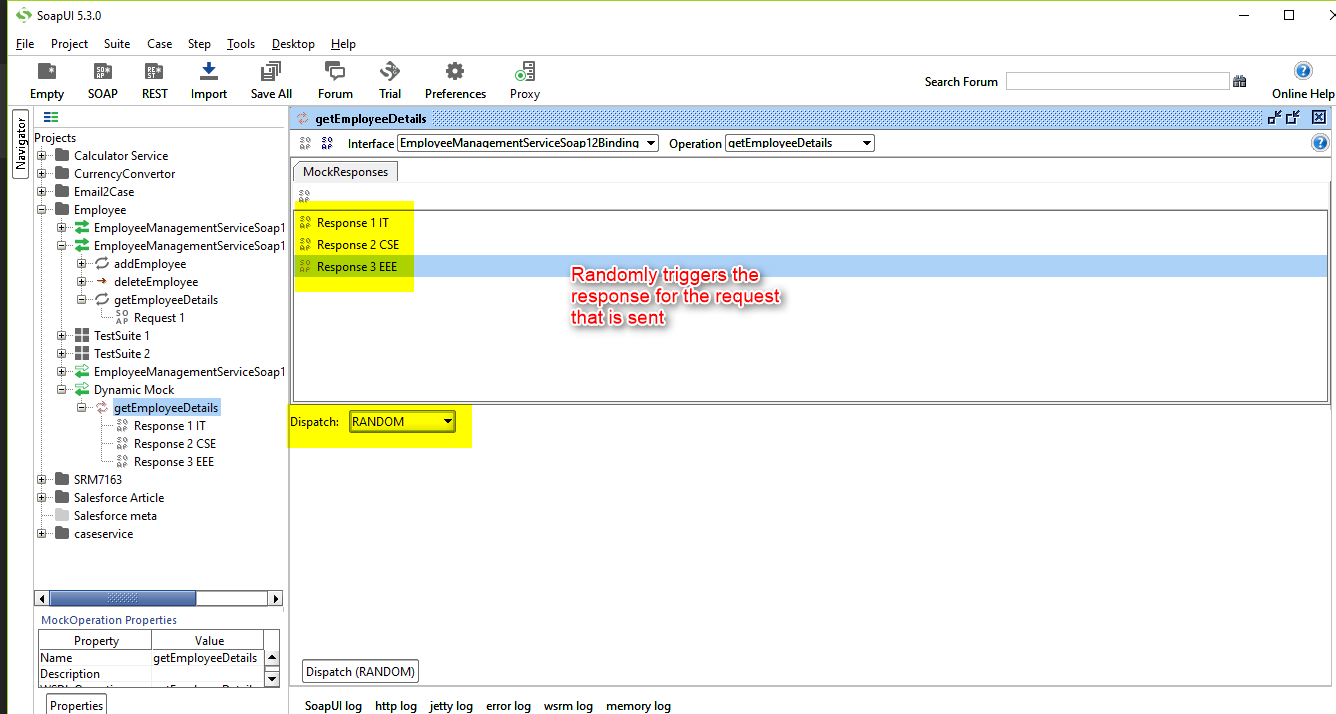 In today’s software world with rapid use of Agile methodology, Mocking services would be of great use since the testers need to work hand in hand with the developers and testers do not need to wait until the webservice is built completely.